Jamaica
High school mission trips provide students the opportunity to travel to locations in the United States and to other countries to do mission work. Bi-annual trips to Jamaica have occurred since 2011.
Jamaica 2019 Message from Mission Trip Leader Pastor Kris Mavin

What an eventful day! We once again found ourselves serving the residents of Westhaven. There was still the crazy excited reception not unlike the concept of the movie 50 First Dates, because the residents acted as if they hadn’t ever seen us!

The students’ day saw spending some one on one time with any number of the residents, both ambulatory and non-ambulatory.

Our teaching team did such a wonderful job yesterday that the staff asked that they move outside to accommodate a larger group, they did, and it was a larger group.

The craft team also hit another home run! There was a fantastic amount of participation with the projects they had planned and invested personal pre-trip time and money for purchase and preparation.

For many of the wheelchair and bed or crib bound residents, both students and staff from our group met them where they were, literally, cradled them, walked them outside, sang to and prayed over them.

It is never easy to say goodbye to a place where you were once terrified to get off the bus, to giving and receiving appropriate hugs of true affection and friendship. As the doors of the busses closed on what has been our hottest day yet, there were those that struggled to hide their emotions and opted for a more honest approach and simply cried.

As we debriefed tonight a one word description of our multiple days at Westhaven was asked for. We received a plethora of responses ranging from “awkward”, “hopeless”, “sadness” to “joyous”, and “eye-opening”.

I mentioned tonight that the saddest thing that could happen at the end of this trip would be to return home unchanged. Our experiences here were not meant to be an event, but rather to facilitate a lifestyle of service to God.

There was a glimmer of hope for at least one who is on his way to being adopted from Westhaven, and yet there are very few assurances, even as he gazes into the distance wondering with his precious simplicity.

One among us also started, and completed an adoption process tonight. A LCS student was adopted into God’s family!  When this was announced  a joyous shout went up to heaven, and a very angry ministry facilitator came out and told me that we had to keep it down because there were other guests. I immediately smelled my arm...just as I thought, chopped liver! My response, “Someone just received Christ, they can relax!”

This friends, may in fact be that anticipated “unspeakable” action of God Jeremiah spoke to in 33:3!

Simon and Chocrean
In 2017, LCS began its sponsorship through Harvest Home Ministries of Simon and Chocrean, a formerly homeless brother and sister who live in Uganda.  Instead of having to attend a Muslim government school, these orphans now enjoy tuition, room and board at a Christian school and have written to and received many letters from LCS students.   It takes only $1,500 to provide this for a year for both children.  We also had the opportunity to provide for their welfare by covering expenses incurred when Chocrean was admitted to the hospital for complications from malnutrition.  In 2018, LCS donated enough to cover Chocrean's special food for the year.  She and Simon continue to grow and gain confidence in school.  In 2019, Simon was accepted for a course in Tourism and Hotel Management at Buganda Royal Institute of Business and Technical Education.  Upon completion of his vocational training in two to three years, Simon can get a good job and begin to earn a living for himself.
LCS coordinates events throughout the year to raise the funds for Simon and Chocrean.  During the annual Michigan/Michigan State Rivalry Week, students and staff show their support for their favorite team- Simon representing U of M and Chocrean representing MSU- by donating money to help their team "win."  Of course, everyone is a winner in this competition since all the money raised goes to the sponsorship of Simon and Chocrean and all the students who participate celebrate the win with an ice cream party.  During basketball season, a nominal entrance fee to the Alumni Game will be charged and donated to these children in Uganda.
The students and staff of Livingston Christian Schools appreciates the support, both financially and prayerfully, as we stretch out our arms, just as Christ does, to love these children.
If you help the poor, you are lending to the Lord, and he will repay you.- Proverbs 19:17 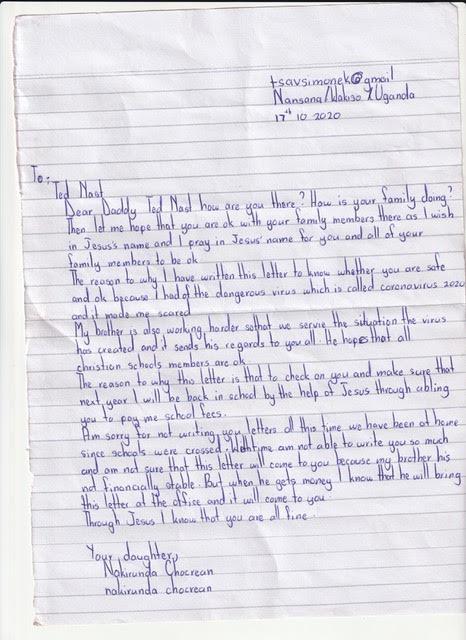